Forty-one years ago a team of Otago Motorcycle Club members returned from a trip to the “Cold Kiwi” in Waiouru and decided there was an appetite for something similar in the South Island. The concept was a bunch of motorcycle riders gathered in the middle of winter around a HUGE bonfire in the middle of a farmers paddock, consuming a few beverages and telling stories about bikes, bikes and more bikes.

And so it was that in 1981, with a suitable site near Oturehua selected, the first of what were to be many legendary Brass Monkey Rally’s was held. And the last rally happened in June 2021 on its 40th anniversary. Rally Chairman Alan Dodds says to celebrate the last 40 years the Brass Monkey Rally committee, of 17 passionate club member, released a special edition “Pilsner beer” and a large range of merchandise as well as lining up three bands for the night as a way of saying thank you to all the motorcyclists who supported 40 years of the event. And the people responded – with 4102 turning up for the event!

“The rain that came late evening did not dampen anyone’s spirits as the stories got taller and longer than the 12 metre long bonfire,” says Alan.

As well as a rally which will go down in New Zealand motorcycle history, the committee also had $50,000 of funds raised to deal with. They decided to spend it in a way that reflects the community spirit of the Otago Motorcycle Club, purchasing a 4WD vehicle for our Central Otago team – a fitting tribute given the rally was held in the Ida Valley. 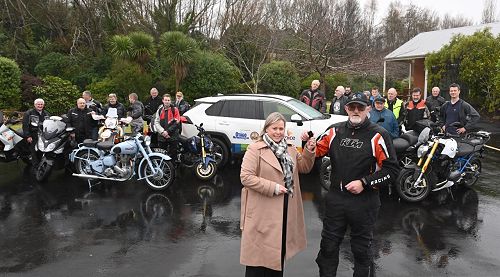 Otago Community Hospice is appealing to the community to help it break even following six months of fraught fundraising.

Thank you to our volunteers for their incredible contribution to the Cromwell Hospice Shop, our wonderful shop manager C...

The Trailer Raffle got underway with a hiss and a roar last November, with ticket sales happening all over the region.